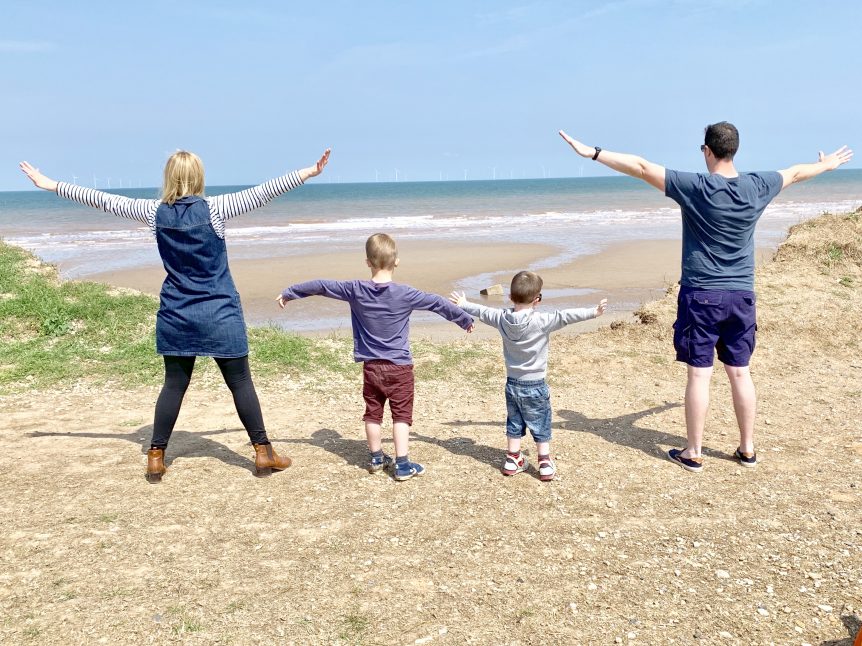 Hands up if you love a caravan holiday.

Finding suitable holidays as a family with additional needs isn’t easy. When The Bears were little we spent a lot of time at my grandma’s static caravan near Bridlington and they were some of our most relaxing breaks.

Fast forward 7 years and my grandma, now 91, sold the caravan a couple of years ago. We haven’t ventured to the Yorkshire Coast as quite as often so when Sand le Mere Holiday Village in Tunstall invited us to stay, we were all really excited to spend the weekend at the seaside. 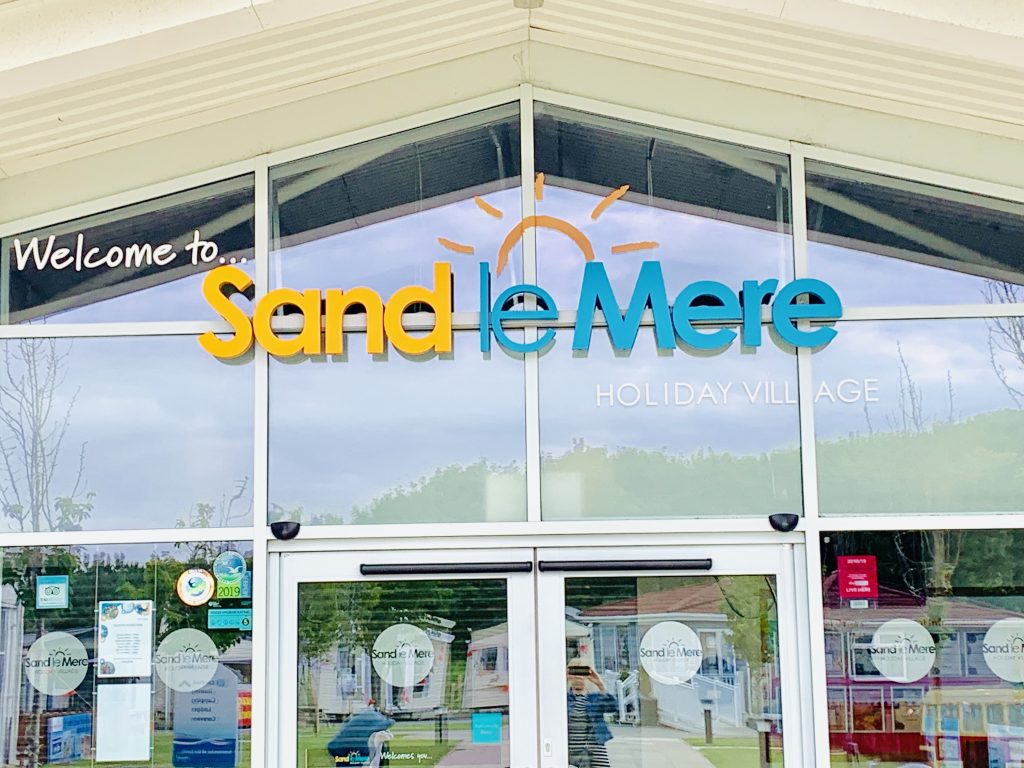 Some holiday parks can feel really big and overcrowded. From the moment we drove into Sand le Mere, it immediately felt well spaced out and clean.

The staff on reception when we checked in on Friday evening were helpful and gave us all the information we needed to settle in for the night. 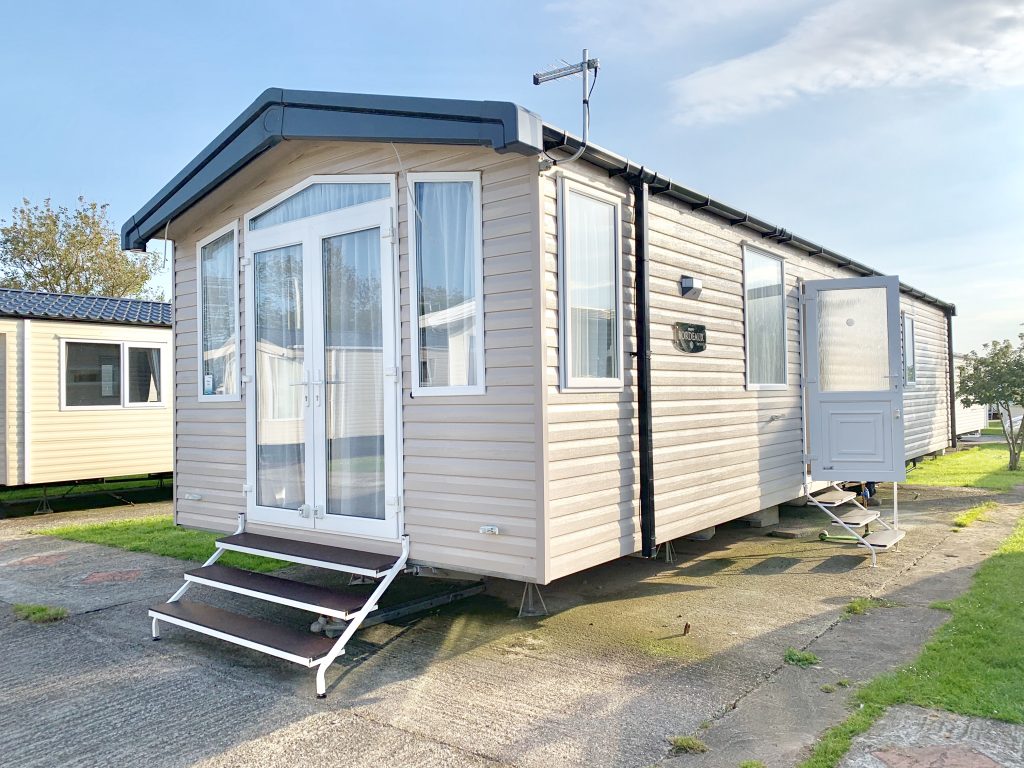 Our 3-bed luxury caravan slept six and was tastefully decorated in muted greys with lots of space inside. The kitchen was clean and fully equipped with cutlery, crockery, fridge, cooker, kettle, toaster and microwave. 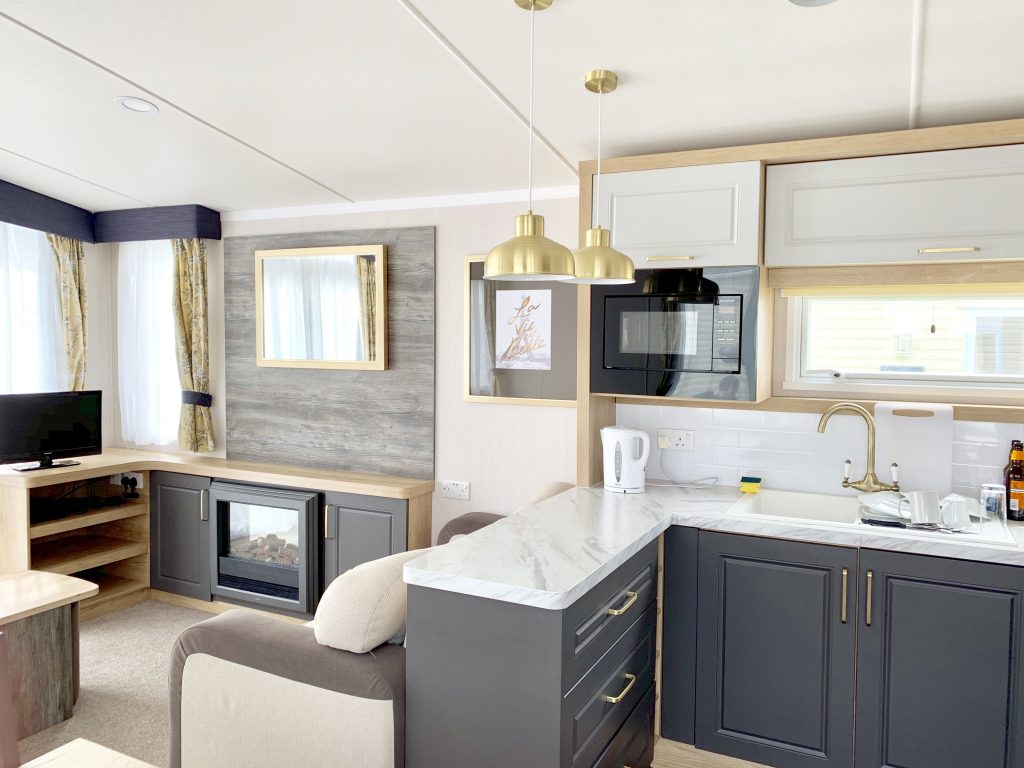 There were two twin rooms and a main double bedroom with an ensuite toilet. There was a separate main bathroom with a hot and powerful shower, which was a particular highlight for me.

The beds were all comfortable (due to The Bears’ night time antics, I tried a few). Don’t forget to take blackout blinds if you’re going in the summer as the curtains don’t block out the light.

A low lighting option in the bedrooms would have been a welcome feature as the main lights are very bright. 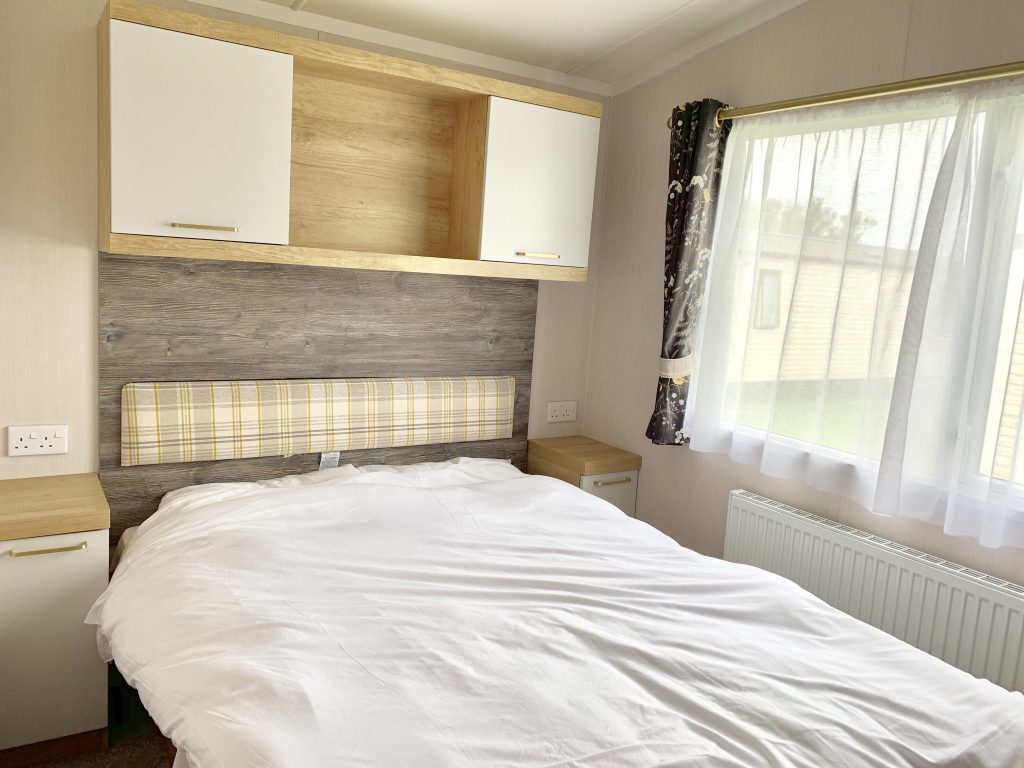 There three types of caravan available at Sand le Mere: standard, mid-range and luxury – so there’s something for all tastes and budgets.

All the static caravans come with pillows, duvets and bed linen with beds made up on arrival. There is Freeview TV and gas/electric fire in the lounge. Plus heating, shower and toilet.

You have to bring toilet rolls, towels and tea towels and washing up materials.

Wifi: There is free wifi in the main buildings and it’s also available in the accommodation at a cost of £3 for a day, £5 for three days and £10 for a week.

High chairs and cots can be hired for £7 each for a short break or £12 for a week. 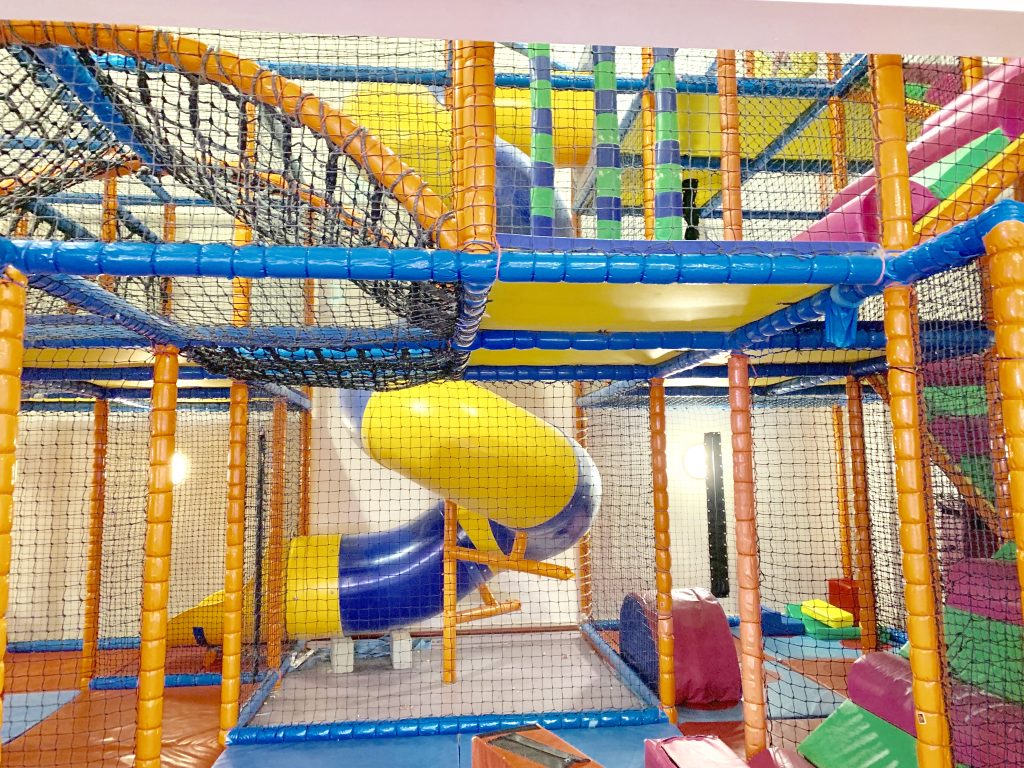 The site has a great leisure complex with a small shop and soft play area with a fab curly slide. There is also an indoor pool, a cafe and showbar with evening entertainment. Outside there’s an adventure playground, crazy golf, and a fishing lake.

There were a few amusements in the leisure complex, which I thought was going to be an issue for Big Bear as he can be sensitive to noise. In the end it wasn’t a problem for him. It was more of an issue for me as I found it quite loud in there. 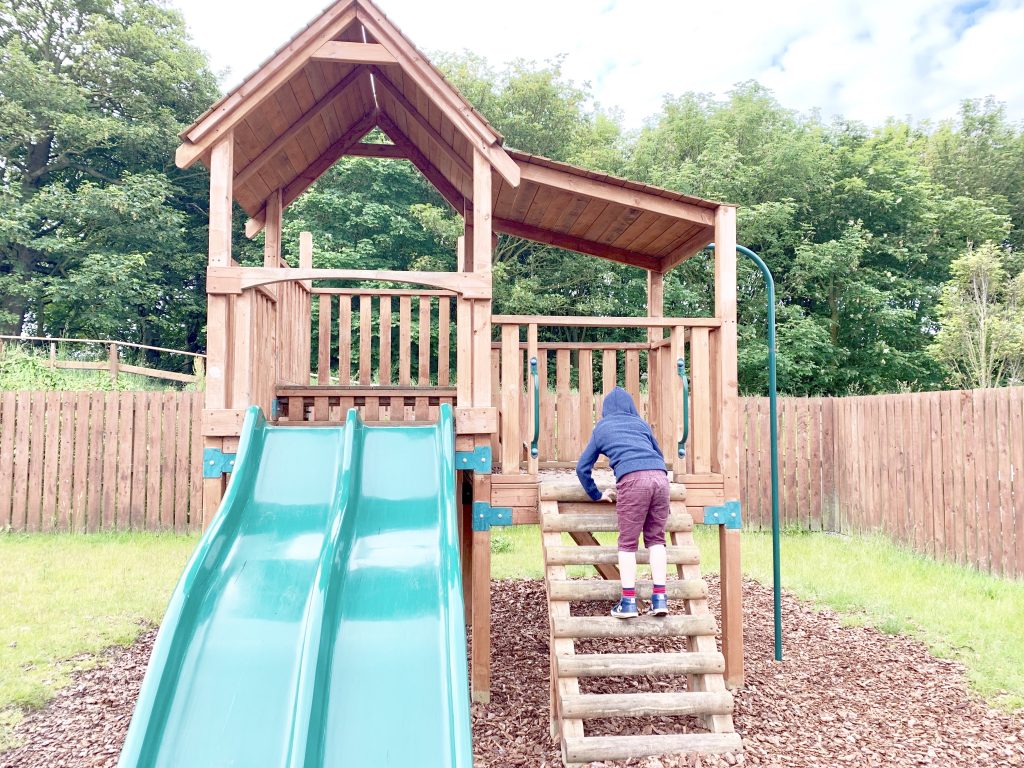 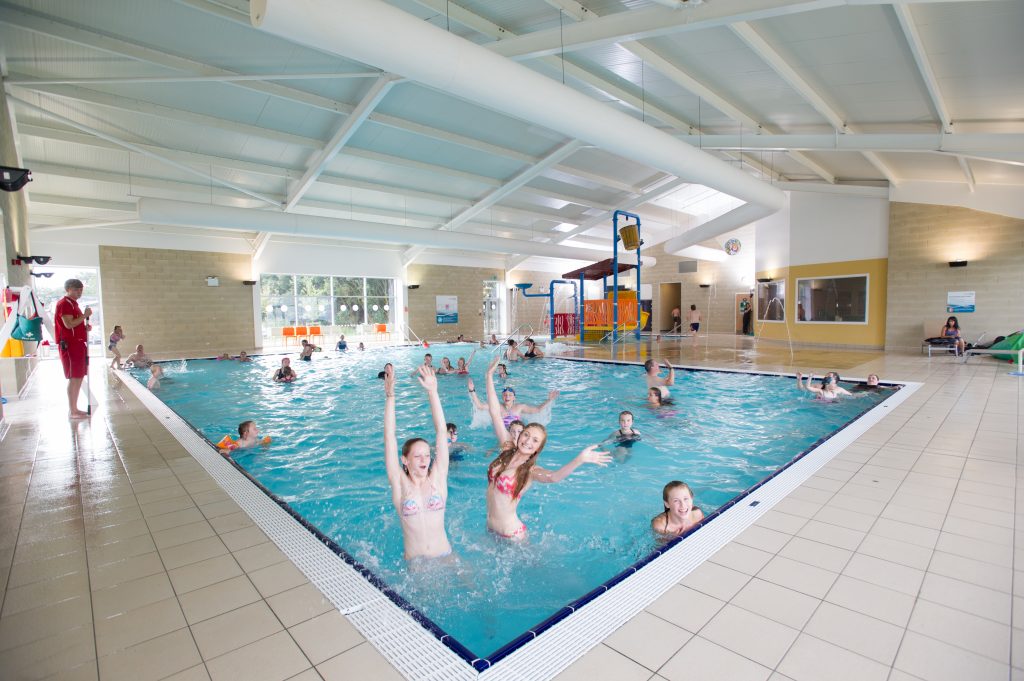 The indoor pool complex has a large pool, a children’s wet play area, splashzone, sauna and steam room. Our kids loved the splash areas and also the aqua paddle (plastic kids rowing boats) session. The pool staff were very relaxed about letting us borrow pool noodles and little toys that Little Bear found near the sun loungers. Hairdryers in the changing rooms would have been a welcome addition. 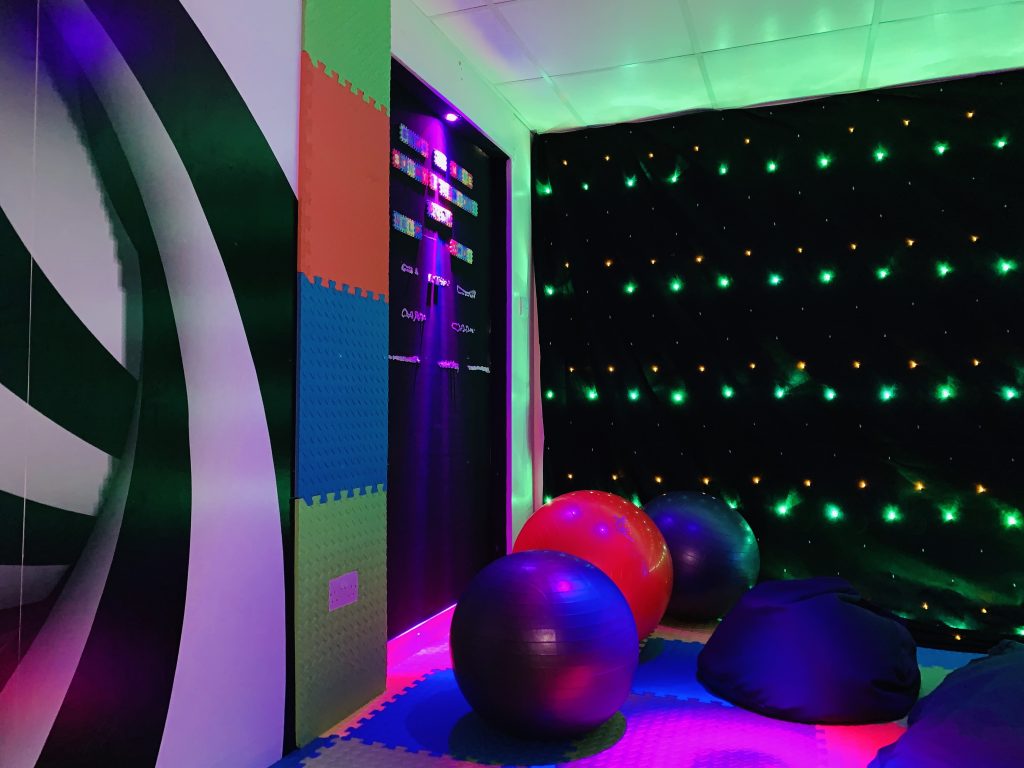 Billed as the first sensory playroom in a UK holiday park, Sonny’s Sensory Room is a fantastic feature at Sand le Mere.

The space was named after Sonny Cooke, whose dad, Allan, was complex manager at Sand le Mere and had the original idea for the project. 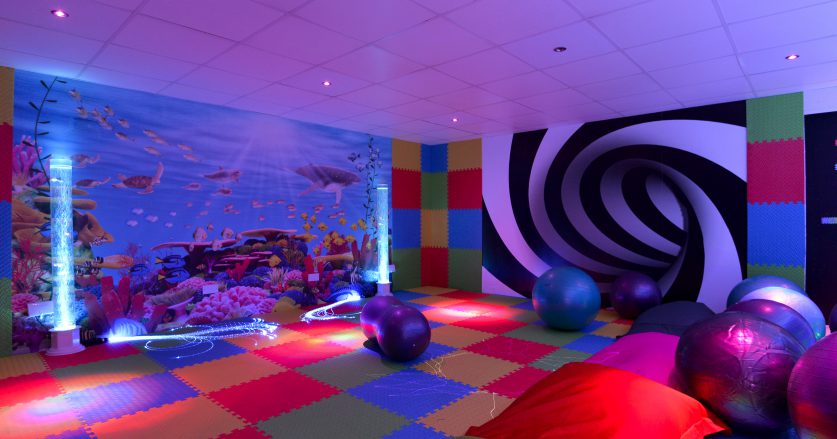 A second room has comfy sofas where parents can relax or calm youngsters who become distressed.

We put on some music and The Bears had a great time dancing around when we first arrived. We then put some calmer music on and they chilled out a little bit, exploring all the different textures and equipment. Little Bear particularly enjoyed resting on one of the beanbags, playing with a rubber toy man he found. Big Bear had a great time bouncing on one of the gym balls. 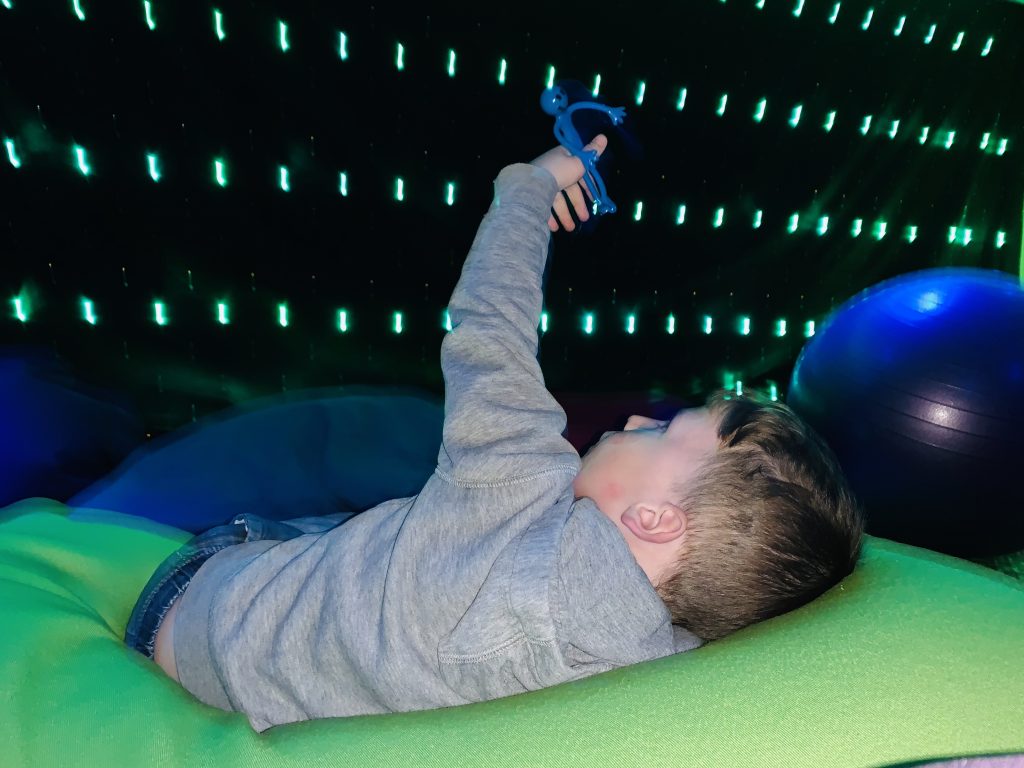 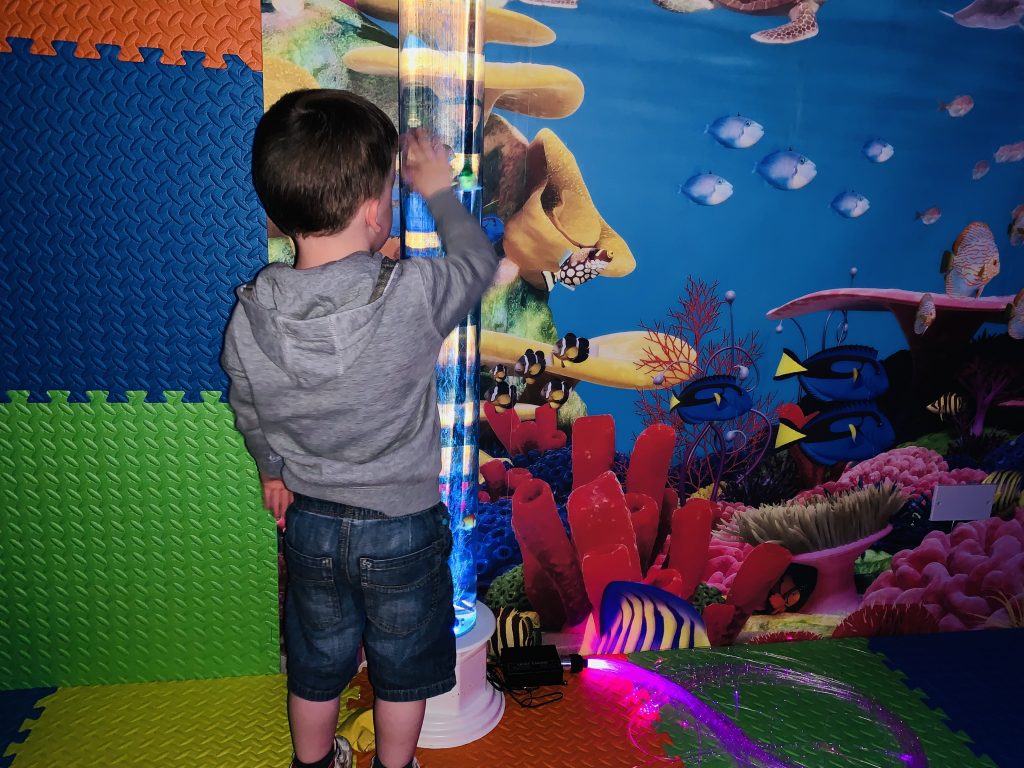 There is a packed daily programme of activities for all ages at Sand le Mere, including family scavenger hunts, archery, messy crafts and kids clubs during the day. There’s also bingo, discos, games and quizzes in the evenings. We didn’t actually do any of the on-site activities as we went out on the Saturday. Unfortunately The Bears were too tired to take part in the evening activities. It all looked like great fun, though. 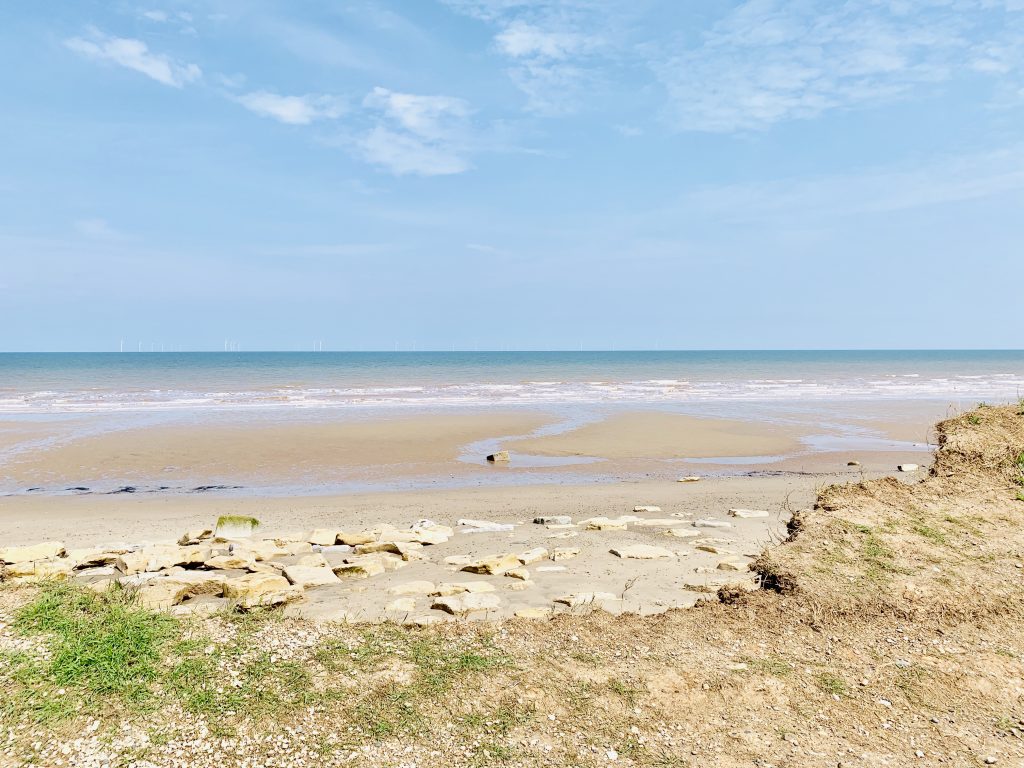 Sand le Mere is well-located for days out on the Yorkshire Coast. It’s within half an hour’s drive of Hornsea, less than an hour from Bridlington and also close to Hull and Spurn National Nature Reserve.

There is a beach next to the holiday park but unfortunately it’s inaccessible due to cliff erosion. It’s lovely for a walk but if you want to access the beach with the kids, you’ll need to get in the car. The nearest accessible beach I’m told is a few miles away in Withernsea.

We went on a little walk along the cliffs on our last morning and spent a happy half an hour flying a kite there.

If you’re looking for a fun holiday park break on the Yorkshire Coast, Sand le Mere Holiday Village should be on your list. The owners have more of an idea about what makes a successful holiday for families with additional needs than most. The fabulous pool and brilliant sensory room are highlights of this family-run park. The accommodation is comfortable and well-maintained. We’re already talking about a possible return trip at some point.

We stayed at Sand le Mere on Yorkshires East Coast, where a three-night holiday starting September 13 2019 costs from £334, based on up to eight people sharing a three-bedroom Luxury caravan (https://sand-le-mere.co.uk/ 01964 670403).