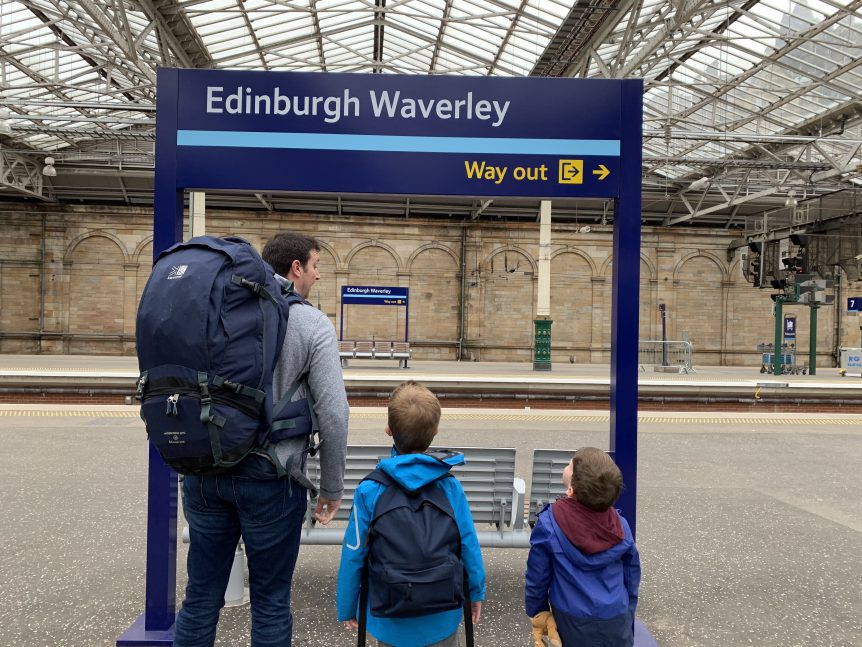 We’ve never tried a city break as a family before.

Funnily enough, the thought of trying to keep two young children who have no awareness of danger, and aren’t keen on walking too far, alive in a bustling environment where they can’t run around has never really appealed to me. It’s the main reason we rarely venture into the centre of our home city.

However, when a work trip to the Edinburgh Children’s Festival came up, I couldn’t really say no. I’m a sucker for theatres and festivals and I’ve taken The Bears to shows since they were toddlers so I knew they would probably enjoy it too.

So at the beginning of May half term we found ourselves on a three hour train ride up to Edinburgh.

It was a weekend of firsts. As well as our first family city break, it was the longest train ride we’ve taken as a family and the first time we’ve left the car at home for a UK holiday.

Packing lightly was quite a liberating experience. Rather than packing the car full of ‘just-in-case’ items, we had to really think about what we were putting in the bags as we had to carry them. It’s made me realise we don’t need half the stuff we’d usually take on a weekend away. 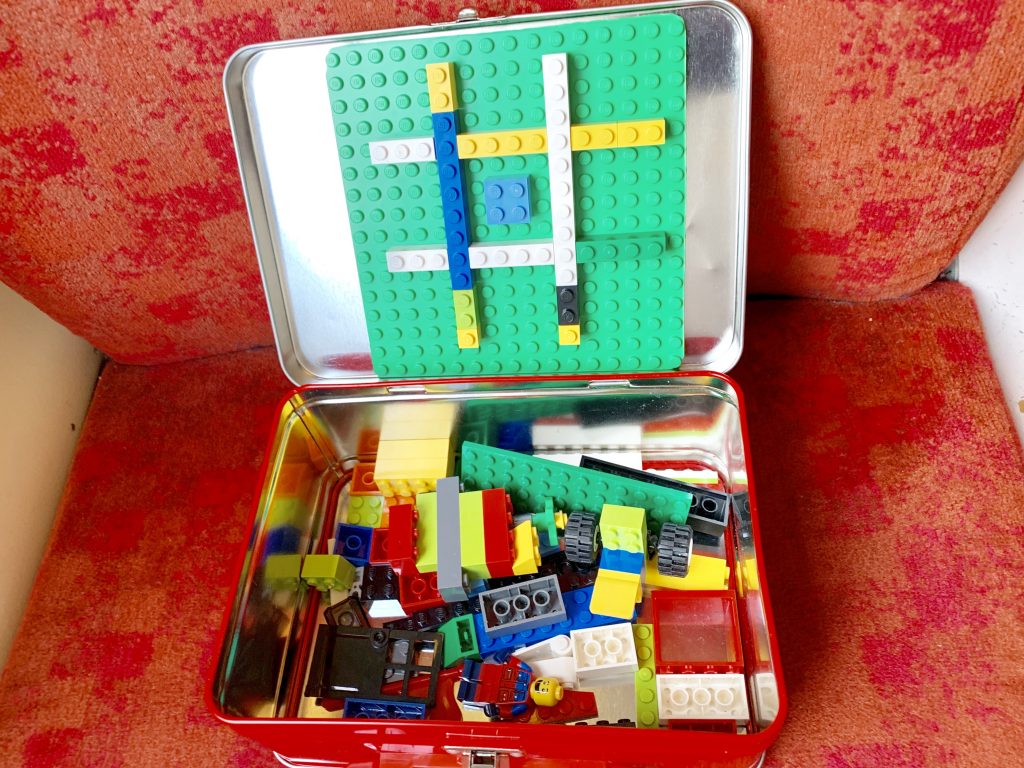 I packed two small rucksacks with food and entertainment for the train. The Bears each had a sticker book and a couple of reading books, plus some mini Paw Patrol characters and vehicles. We also took a small tin of lego that my friend gave us, which Little Bear really got into, and a notebook and pencil so Big Bear could play hangman. We had iPads and headphones for the last part of the journey when they were both getting a bit restless. 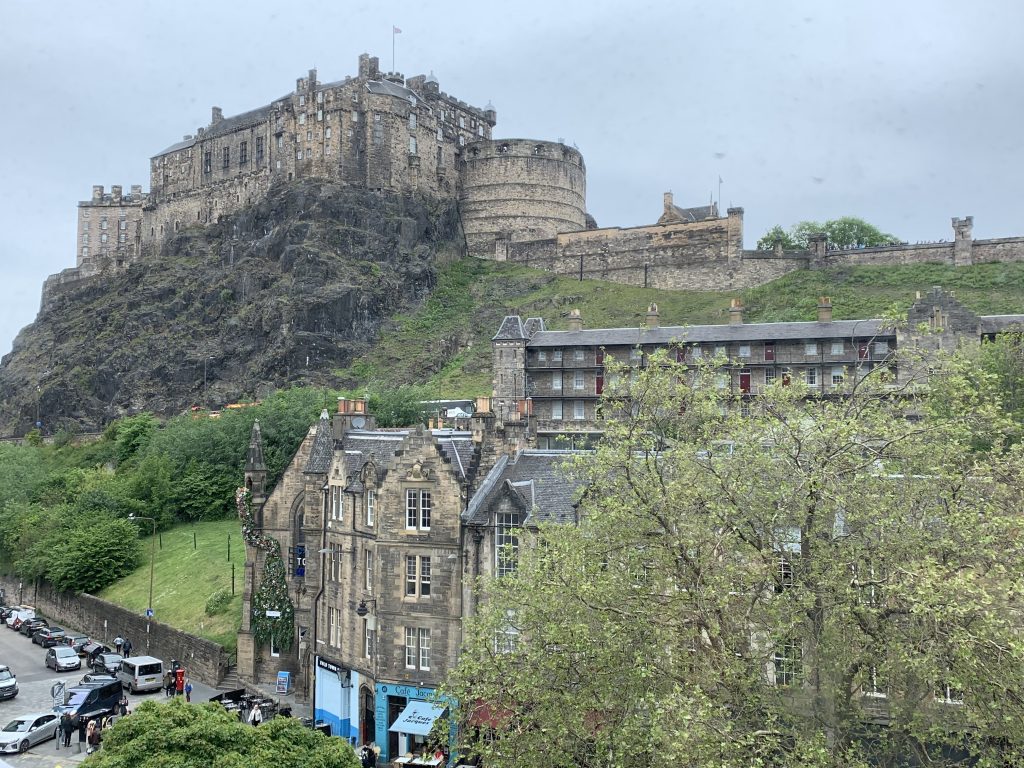 We were lucky enough to stay in a hotel in the Haymarket area at the foot of the castle so it was really central for all our activities. It also had a pool which was a bit of a luxury and also a godsend, particularly for Big Bear. It opened at 6am so J took him for a swim before breakfast each morning and he also had an extra swim on the Sunday afternoon to relax after our busy morning. 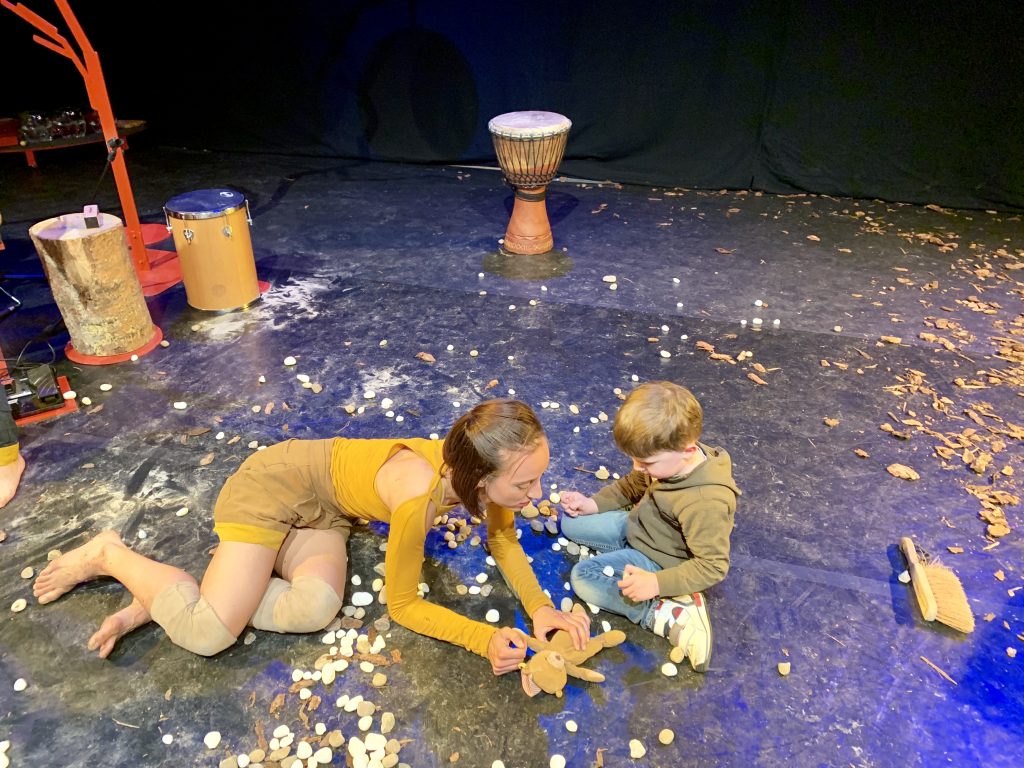 I’ve been to the Edinburgh Fringe (pre-kids) but the Children’s Festival wasn’t on my radar at all until this trip came up. There were loads of shows on and some even include relaxed performances in their run. Some of the best shows go on to feature at the Fringe in August.

We saw Valentina’s Galaxy – a brilliant show aimed at 2-6 year olds about the first woman in space: Valentina Tereshkova. It was really well aimed at its young audience and we managed to grab a sofa to sit on so The Bears could lie down and watch the show. They were also able to meet the cast afterwards and hold an asteroid, which really captured their interest.

The other show we saw was an interpretive dance performance called Mappamondo. On paper it sounded promising and ticked lots of sensory boxes: an imaginary journey across the earth where sand, earth, bark and a range of natural sounds are playfully interwoven by a dancer and percussionist. The main draw for us was that the children could go up on stage after the performance and play with the materials used in the performance.

However, a delayed start time and a slow start to the dance meant that the young audience – some of whom had additional needs – wasn’t really interested in the 35 minute show until about halfway through when it picked up speed.

One of the nice things about going to the Children’s Festival is going to places that wouldn’t usually be on your radar as a tourist and seeing shows you wouldn’t usually see. Most of our theatre visits to date have been to see shows The Bears are already familiar with through books and television programmes.

It was an experiment taking them to see shows they hadn’t heard of. We watched a couple of YouTube videos beforehand so they could see a little bit of what they looked like. The first half of Mappamondo aside, The Bears loved the performances we saw, and I’d definitely take them to the festival again. 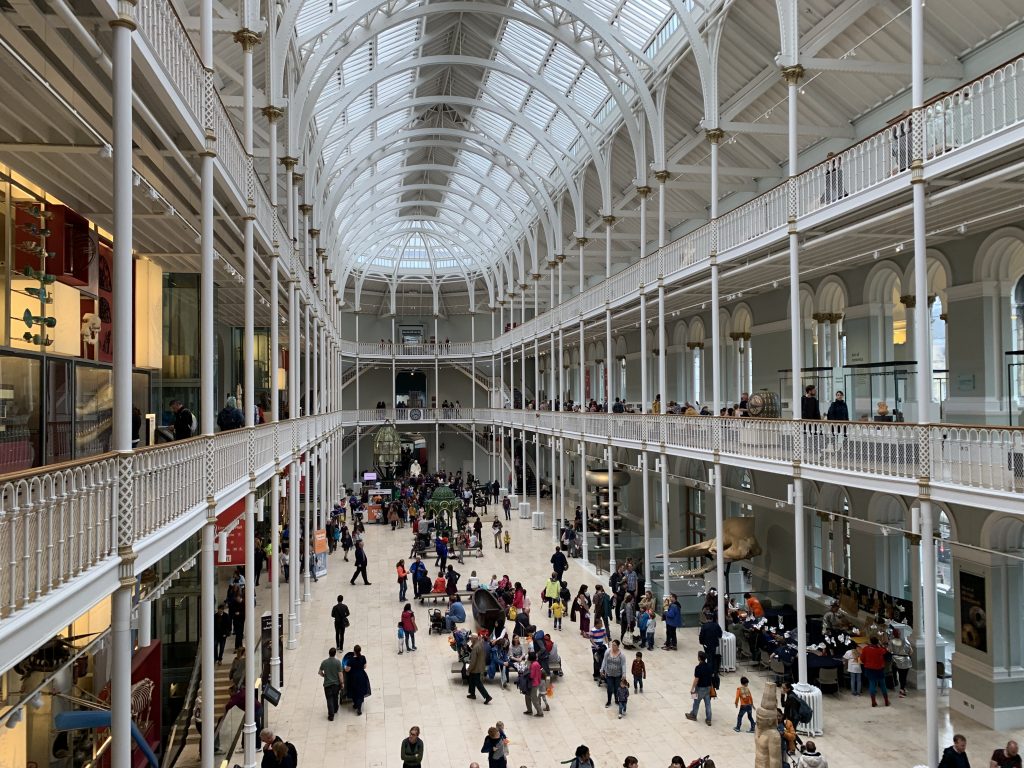 You could quite easily spend a full day here as the museum is vast and there is loads for kids to do. It’s also free! From the age of dinosaurs to the technology of the future, the galleries contain treasures from around the world.

We popped in on our way back from watching Valentina’s Galaxy on our first afternoon as there were some family-friendly crafts and activities happening as part of the festival. We skipped the crafts as The Bears had no interest in them. Instead, we had a brief wander round some of the more child-friendly galleries and made our way to the impressive view on the rooftop terrace.

The museum has a brilliant range of initiatives to support and welcome families with autistic children and a comprehensive website to guide you through what to expect when you get there. Resources include a visual story on the website, sensory backpacks to borrow, the chance to visit outside the main opening hours, communication cards in the style of PECS, and the best places to go in the museum if your child gets distressed. 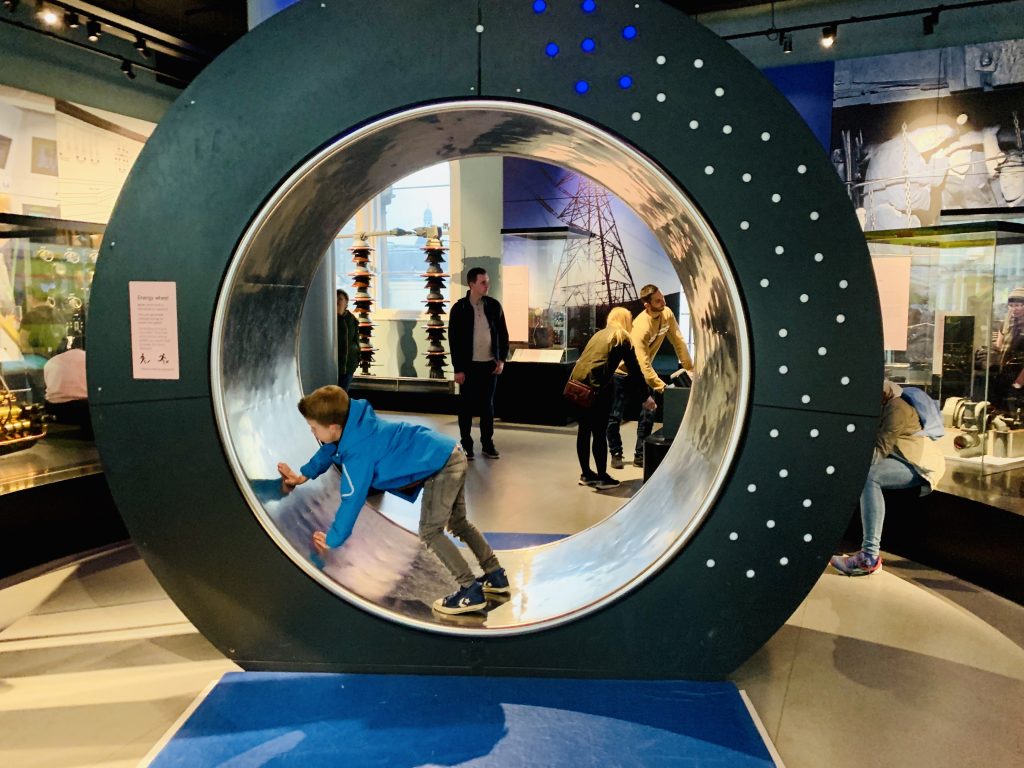 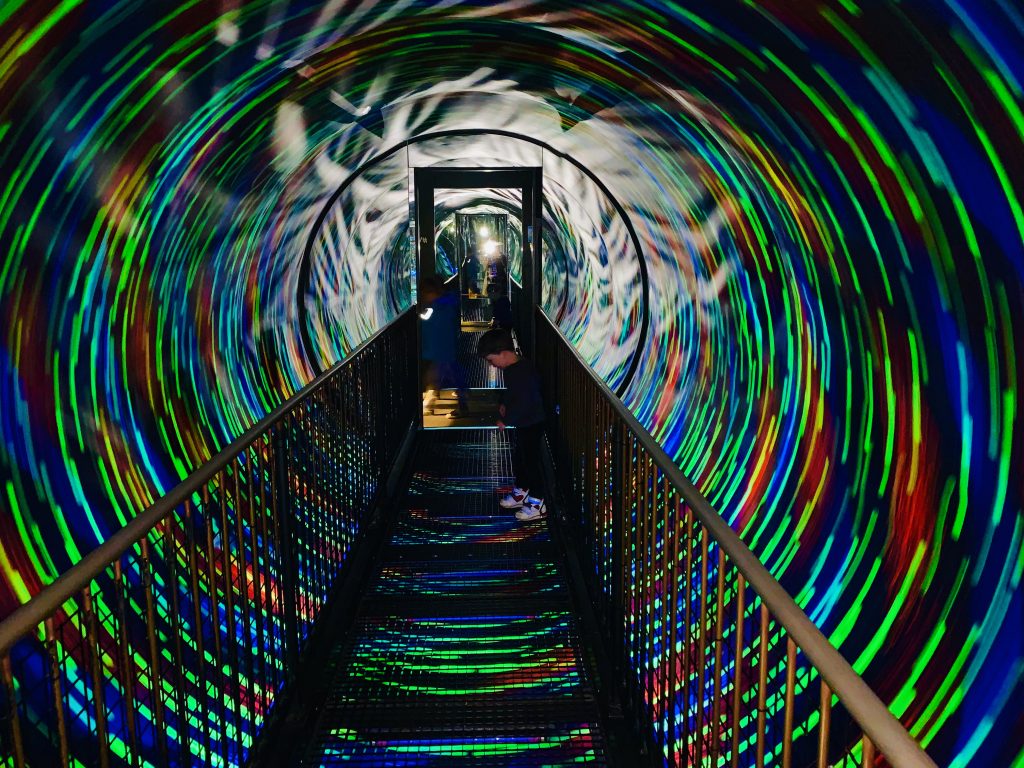 If I could design the perfect museum for The Bears, Camera Obscura would come pretty close. Five floors of interactive exhibits where children are encouraged to touch EVERYTHING.

Camera Obscura, which sits at the top of the attraction, is the ancestor of the photographic camera. 165 years ago it was the first ever purpose-built visitor attraction in Edinburgh.

As well as the camera, visitors can experience the World of Illusions galleries, which feature everything from shrinking yourself like Alice in Wonderland to holograms, a vortex tunnel and a bewildering Mirror Maze.

The Bears LOVED it as it ticked all their sensory boxes. They could explore everything at their pace and we weren’t constantly having to tell them not to touch things.

The tickets are quite expensive (£16 for an adult and £14 for a child over 5 when we visited). However, carers get in free and if you have to leave because your child hates it, they will refund your tickets in full. They also stamp your hand so you can leave and come back later in the day.

The only downside is that there isn’t a lift as it’s a listed building. So if you have mobility issues then unfortunately you’ll struggle with the five flights of stairs.

Also remember, as with many places, the exit is through the gift shop. 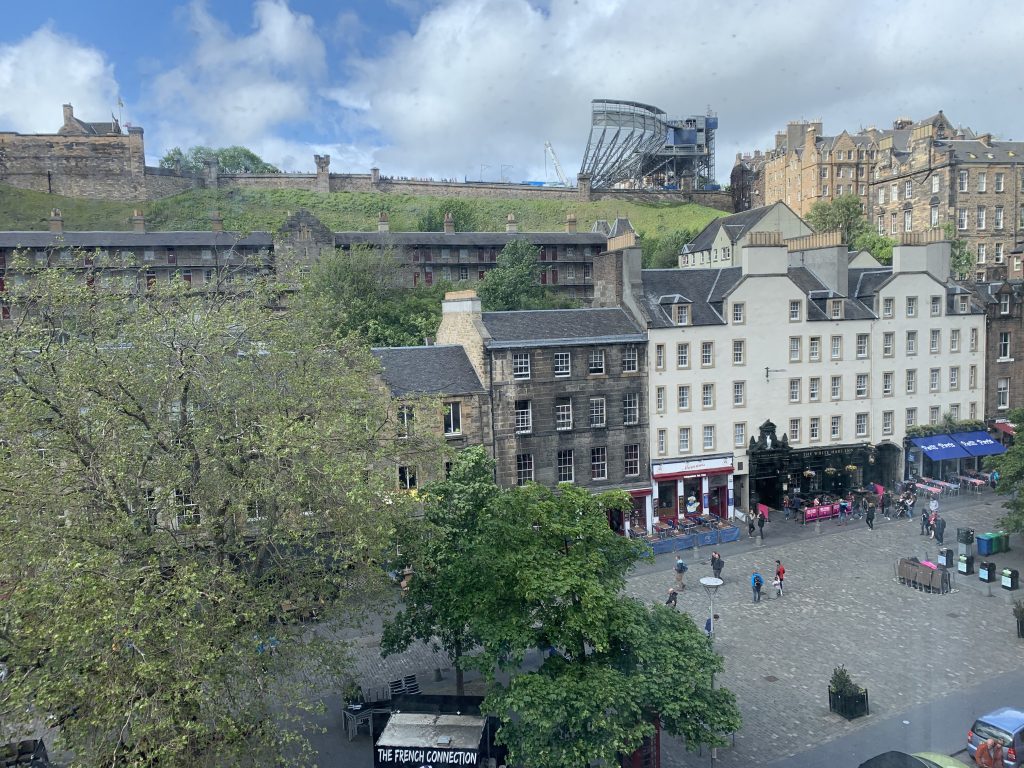 Because we were in a hotel, we had to eat out most of the time. On the first day, we ate our picnic lunch on the train and booked an Italian restaurant – Vittoria on the Bridge – for our dinner at 5.30pm.

It was a nice place which looks smart inside but the staff were really friendly and didn’t bat an eyelid when Little Bear smashed a water glass all over the table. They just told him it would bring him ‘good luck’. The food was also nice, although it was quite an expensive place to eat.

On the second day, The Bears were getting tired so we decided to have our main meal out at lunchtime following our visit to Camera Obscura in the morning. We all love seafood so when we saw that seafood restaurant Mussel and Steak Bar was in between the attraction and our hotel, we decided to go for it.

It was a gamble and we were probably pushing our luck if I’m honest. The Bears were a bit too tired and restless to sit still for long so it was all a bit rushed, although they did enjoy their bowls of mussels. That afternoon we went back to our hotel for a swim and a film followed by a picnic tea in our hotel room to relax.

It was an ambitious weekend and it was hard work being with The Bears in a busy city environment. However, they loved exploring Edinburgh, the shows and tourist attractions we visited. Having a central hotel with a pool made a big difference as it meant we had somewhere to escape and relax when they got tired. Although it was a busy weekend, having the Sunday afternoon to relax at the hotel was really important to us and meant that we didn’t have to keep going when everyone was tired.

It’s no lie when I say I planned the itinerary for this trip to the nth degree. I wrote down timings for everything so we knew where we needed to be, at what time and roughly how long it would take to get there. However, it really paid off as it meant we were organised and didn’t have to worry about where we needed to be next.

We definitely need to make a return visit to Edinburgh soon as I feel we’ve only just scratched the surface of things to do and I’d love to go to the Children’s Festival again.