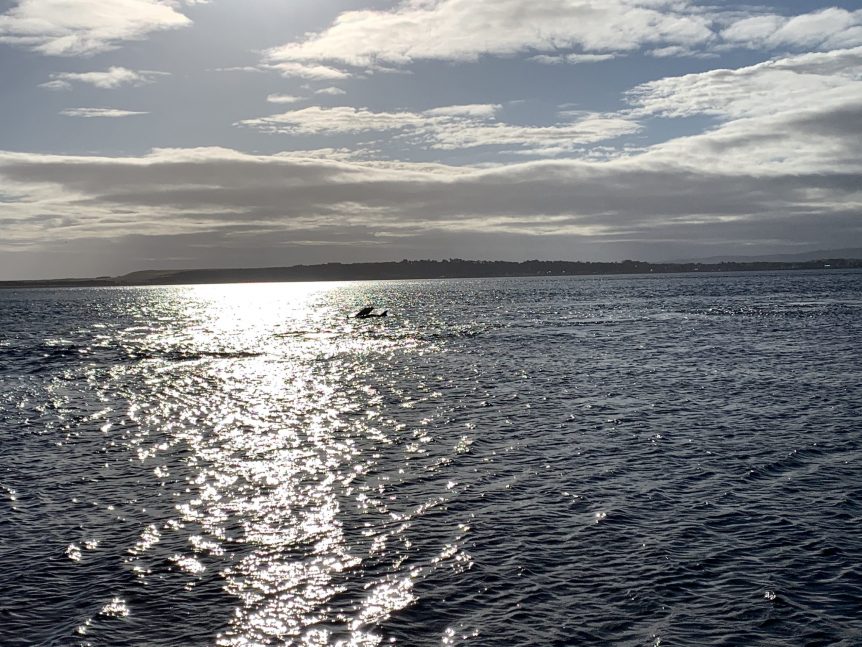 “What about that one?”

“When are they coming mummy?”

“Hmm…Oh, look, have you seen that boat over there?”

We’d secured the perfect spot. Sitting almost at the tip of Chanonry Point we had a clear view for scanning the Moray Firth for any ripples of movement.

It was a beautiful summer’s evening on one of the hottest days of the year and  Big Bear and I  – along with about 50 other people – had come here for one reason: to see the most northern colony of bottlenose dolphins on earth.

The resident population of dolphins off the Black Isle near Inverness features some of the largest dolphins in the world, measuring an average of almost four metres in length, compared to an average of 2.5 metres in other parts of the world.

Chanonry Point is one of the few places in the UK  where you can see dolphins up close.

I imagine in normal times spectators are a lot closer together, jostling for the best vantage point. But in the middle of the Covid-19 pandemic, everyone remained socially distanced and spread out so it’s advised to get there early.

Dolphin spotting is not for the impatient and despite my best distraction efforts, after about half an hour of waiting, Big Bear began to get restless. After 45 minutes we sadly had to leave, without a dolphin in sight.

The best time of day to see wild dolphins here is 1-2 hours after low tide in the spring and summer when the dolphins are hunting for migrating salmon, generally when the tide is starting to rise.

You might be lucky and see them straight away or you might have to wait an hour or so.

Luckily there was another low tide early the next morning so I crept out of our hired motorhome on a nearby campsite just before 6am and walked down to Chanonry Point on my own to try to catch a glimpse of an elusive pod.

My husband had seen a pod a couple of days earlier and I was determined I wasn’t leaving until I’d seen at least one too. As we were leaving that morning, this was my last chance.

After about an hour, my patience paid off and I saw a pod of four dolphins playing in the water a few metres from where I was standing. They continued for a long while, bobbing in and out of the water – an awesome sight.

Chanonry Point is generally regarded as one of the UK’s most spectacular land-based dolphin spotting sites. However, there are a number of other places in the UK where you might spot a wild pod too.

The limestone cliffs around Durlston Head at the tip of the Isle of Purbeck are a vantage point for spotting the pods of dolphins which swim in the waters along the Dorset coast. There is a dolphin and whale observatory near Durlston Head and you can sign up to an alert system to hear about activity as it happens.

Britain’s biggest resident population of dolphins lives in Cardigan Bay. Summer months are the best time to see them, with New Quay being the hottest spot. Their smaller cousins, harbour porpoises, can be seen around most of the Welsh coast, including off the coast of Gower, the Pembrokeshire islands, and in the seas off Anglesey and the Llŷn Peninsula. And if you’re really lucky, you might even spot a humpback whale swimming past.

The rocks and coves here are famed for their dolphin sightings.

Considered the best spot in the county to see dolphins, porpoises, basking sharks and sometimes even whales.

Have you seen UK dolphins? I’d love to know where you’ve spotted them.

Read: How to tour the stunning Scottish Highlands in a motorhome in one week